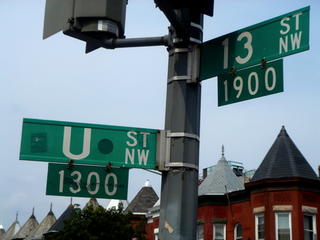 It's going to be an exciting week on the 1300 block of U Street, with three new promising spots poised to open. First off, new cafe and lounge Creme (1322 U St. NW) is beginning a soft opening tonight with a limited menu. I stuck my head in and met the jovial chef/owner "T" and his business partner Brian. They were beaming with excitement and pride over their new restaurant. They gutted the space previously occupied by Cottage Cafe, and the result is handsomely appealing. Rich jewel tones on the walls are offset by expanses of light blond wood and two oversized gilded mirrors. The partially exposed ceiling shows off shiny new duct work, giving the space a contemporary feel. A roomy bar anchors one wall, and a small open kitchen sits in the back of the space. On the opening menu: shrimp and grits ($15), oven roasted chicken "served with a large portion of love and white rice" ($13), pan-roasted cod with clams, bacon, potatoes and onions in a cream sauce ($16), and a Kobe beef hot dog ($9). The grand opening is Thursday, August 4.

Right next door, Al Crostino is set to open Sunday. And just down the street at 1336 U St., the paper is off the windows at Tabaq, and they're hosting friends and family for a preview on Tuesday, which means it will probably be open to the public by the weekend. 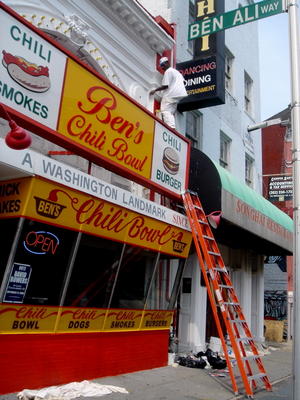 As a resident of the neighborhood, Metrocurean was slightly disappointed when the best eating options the new Ellington building could pull in were the mediocre Alero (as discussed in this old DCist post) and Sala Thai. (And a tanning salon in a building named after the Duke? I won't even go there.) But with this latest flurry of locally owned activity, things seem to be looking up.

Even neighborhood anchor Ben's Chili Bowl was getting spruced up with a fresh coat of paint this weekend. (Photos by Metrocurean.)