What Capitol Hill may lack in restaurant choice, it certainly makes up for in bars. Here's a snippet from my column in today's Roll Call about the next bar to arrive on the Hill:

"It’s been more than 70 years since Prohibition ended in the District, but a new Capitol Hill bar plans to channel the days of speakeasies and bootleg booze — only this time the booze will be legal. 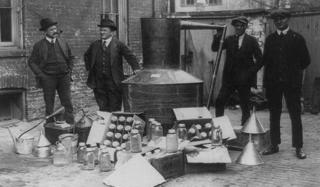 Mark Menard and Mike Schuster, owners of the Pour House and Trusty’s, and Jim Spore have taken over the space formerly occupied by Zack’s at 613 Pennsylvania Ave. SE and plan to open The 18th Amendment in mid-August.
The bar takes it name from the amendment that enacted Prohibition in 1920 and will take its design cues from the speakeasies that cropped up in response to the alcohol ban.

The renovated space will be divided into an upscale bar on the main floor and a more casual hangout in the basement. The upper level will offer a full bar with high-end liquors and about eight beers on draft in an art deco-inspired room. The basement bar — 'the kind of place where gangsters would have hung out,' Spore said — will have furniture fashioned from old whiskey boxes, barrels and pews and a small lounge with couches.

The 18th Amendment will also have several pool tables and a limited menu of appetizers, small pizzas and paninis.
'We want it to be the new place to be on Capitol Hill,' Spore said."