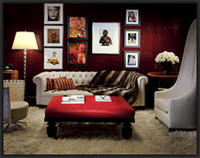 The quirky Kimpton Hotel and Restaurant Group has done a lot for this city, renovating historic properties and hideously ugly motels and leaving a trail of chic, funky boutique hotels in their wake. What's more, they brought us the delicious Firefly, the mod Helix Lounge, the more subdued Topaz Bar and Bar Rouge (pictured) and the mail-sorting-hall-turned-brasserie Poste. They arguably could be given full credit for creating a vibrant hotel bar scene in D.C., where not much of one existed before.

Next stop: the Radisson Barcelo at 2121 P St. NW. Kimpton is planning a $32 million renovation of the aging hotel to transform the building into the Hotel Palomar, the Washington Business Journal reports. Like the Hotel Monaco brand, Kimpton plans to open Hotel Palomars in several cities. Washington's will be the second — there's already one in San Francisco.

On the food front, the hotel will house a new Italian restaurant called Urbana, which will occupy the space where Gabriel stood. Metrocurean hopes they can recruit a talent like John Wabeck at Firefly to man the kitchen. Look for the new hotel and restaurant to open in January, and keep an eye on Metrocurean for updates.