The "Secret" Next U Street Hot Spot 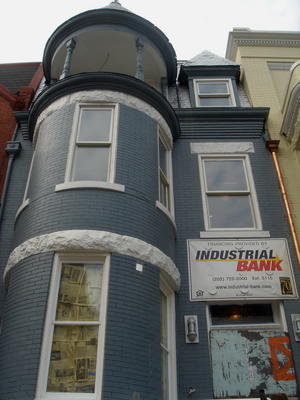 The background: After frequenting Meze in Adams Morgan, I got to know Melih, one of the affable owners. He and his brother, Omer, left the popular Turkish bar more than a year ago, and I've since spotted Melih on the 1300 block of U Street again and again.

The facts: For nearly a year now, Melih has been telling me that he plans to open in the U Street area what he called one of the coolest places in the city "very soon." He told me it will be called Tabaq and will serve food (presumably Turkish?), including brunch. He refuses to tell me where exactly it will be, preferring to keep it a surprise. (The suspense was killing me.)

The Metrocurean speculation: So I've done a little sleuthing, and I'm speculating (with near full confidence) that Tabaq will be located at 1336 U St. in a beautiful old — previously abandoned — four-story brownstone, now painted a steely blue (see photo). A view from across the street reveals just the tip of a glass-enclosed top story (perhaps a lounge with a sky view?). The cracks in the papered-over windows show there's still a lot of work to be done. Here's an excerpt from the Alcohol Board application I dug up: "The new restaurant will be a further exploration of Mediterranean tapas culture. In order to blend with the U St. cultural scene they want to provide jazz performers, specifically targeting new young talents." The Alcohol Board hearing also confirms the address.

The prediction: Seeing what these guys did with Meze, near the start of D.C.'s tapas craze, and considering the size of the new space, Tabaq should be one of the cooler, low-key lounge spots to open in a while. Stay tuned for more details or please comment if you know more scoop.