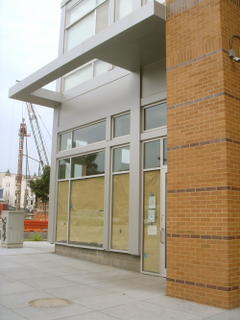 One of the more ambitious restaurant projects under way in the city, Busboys and Poets is poised to open in the next few weeks at 14th and V streets NW. The vast space, located on the ground level of the new Langston Lofts, will house a restaurant, a bookstore, a full service bar, a coffee house (with Wi-Fi of course) and a fully equipped stage for performances.

The windows are still covered with paper, so I only got to peek through a tear, which revealed floor-to-ceiling dark wood book cases (with copies of Toni Morrison's "Remember" on display), a tiled bar and an enormous projector screen behind a stage. There's already a series of events booked for the space, including film screenings and book readings.

According to the Web site, Busboys and Poets will serve "American cuisine with an eclectic twist, including many vegetarian and vegan options." But beyond feeding people, the new spot is aiming to be a community resource space. Owner Andy Shallal (also of Mimi's American Bistro) is a fixture in the area's theater and activist communities and is keen on giving back to the neighborhood. He has teamed up to operate the restaurant with Teaching for Change, a local nonprofit that "provides teachers and parents with the tools to transform schools into socially equitable centers of learning where students become architects of a better future," according to the group.

It will be interesting to see how the multi-use space is received by the neighborhood. The only similar concepts in the area are Kramerbooks and the identity-challenged LeftBank. But Busboys and Poets seems to have a loftier goal than simply selling booze and books. Stay tuned for word on an official opening date.
(Photo by Metrocurean.)