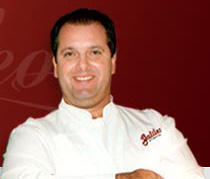 It's always nice when an off-the-beaten path D.C. spot garners national attention, and a celebrity chef hawking cheap sandwiches in his upscale restaurant is certainly noteworthy.

Galileo Chef Roberto Donna's egalitarian lunch grill got a mention in the September issue of Frommer's Budget Travel magazine. The article asked famous foodies where they turn for no-frills, affordable meals. Former Washington Post food critic Phyllis Richman spoke for the District. "One of the most upscale restaurants in town, Galileo, has a bargain lunch in the lounge. If you see the charcoal grill out front, it means that they're grilling sandwiches in the back. The best is the pork sandwich. It's $5 for a huge one with a green sauce and fried onions. Also, they have the best cannoli on the East Coast for $2.50. You'll see limousines sitting outside waiting for someone who's gone in to get his lunch," she told the magazine.

Chef Donna fired up the grill last summer after finding out that much of the business at his renowned restaurant came from out-of-towners. He wanted to do something for the people who live and work in the city, and grilling out at lunch to sell $5 sandwiches fit the bill. It's sort of like Donna's personal lemonade stand.

If you haven't been, you owe it to yourself to make the trip. The grill is usually open several days of the week, according to the chef's schedule. Don't miss the juicy pork shoulder sandwich with the chef's special green sauce, made from olive oil, herbs, anchovy and egg. And don't forget to say hello to the jovial Donna — he's the guy behind the grill.

Check out the restaurant's Web site or D.C. Foodies for more information, including a menu and dates.