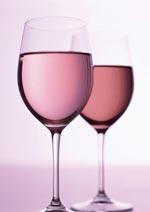 Attention gentlemen: The best way to woo a woman this summer just might be to order up a bottle of pink wine.

A Chicago Tribune story last week delved into the reasons men are wearing pink these days and cited research published in Men's Health last year on what colors attract women. "Pink came out on top," the article reported.

So if wearing pink attracts the ladies, why wouldn't sipping on a glass of rosé? It surely proves a certain level of comfort with one's masculinity, and as DCist food writer Kanishka proclaimed last week, pink (as in wine) is in again.

Furthering the cause of the pink drink is Firefly chef and oenophile John Wabeck. He's a fan of rosés and just launched the restaurant's third rosé festival, which runs through September. Breaking down pink vino's negative stereotypes one bottle at a time, the knowledgeable staff at Firefly is happy to explain the nuances of each wine. During last summer's festival, a waitress guided my table toward a great bottle (that I can't remember much about beyond it being completely different than what I expected ... it was a year ago after all).

Firefly's festival "features seven refreshing rosés: two fruit-filled Australian vintages, three French rosés, one tart and funky Catalan option from Spain, and a peachy, herb-scented choice from California," according to a press release. Only one is available by the glass, so you'll most likely have to commit to a whole bottle. But considering they've been chosen by Wabeck, who is training for a master sommelier distinction, you probably can't go wrong.

If you go, whether you're wooing a date and wearing pink or not, don't miss those addictive truffled fries and the tasty fried oysters with chipotle-spiked tartar sauce.