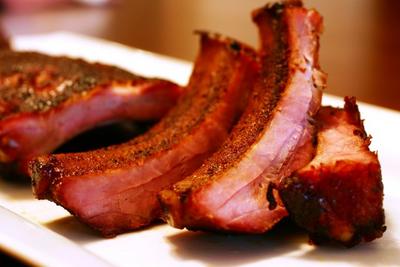 Despite opening earlier this summer, Riedel's Restaurant in Van Ness is finally done putting on the finishing touches and tweaking the menu, and it's celebrating its official grand opening this month with a generous offer of a free entrée with the purchase of another entrée, after 5 p.m. Sunday through Wednesday.

That means you could enjoy a rack of baby back pork ribs ($24) and get a plate of Texas style beef ribs (regularly $22) for free. Check out this pdf of the dinner menu to see Riedel's complete offerings, which also include pan roasted rockfish, grilled lamb kabob and seafood gumbo. Memphis, South Carolina, Kansas City and Texas-style homemade sauces are available to dress your 'cue. (Metrocurean notes the absence of her native North Carolina sauces—both vinegar-based and tomato-based—but I won't hold it against them.)

The restaurant considers itself "a sophisticated alternative to the stereotypical barbecue 'joint,'" meaning there aren't peanut shells all over the floor and tables are covered with actual cloths. And don't overlook the bar offerings. According to a release, owner Doug Riedel was formerly wine director for Occidental and Sam & Harry's and has "crafted an impressive list of wines that ideally complement the restaurant's barbecue as well as a comprehensive list of spirits including single malt scotches, small batch bourbons, and fine tequilas."

Riedel's is located one block south from the Van Ness Metro stop at 4221 B Connecticut Ave. NW. Look for the red awning.