What's Hot: The Land of Ice and Snow 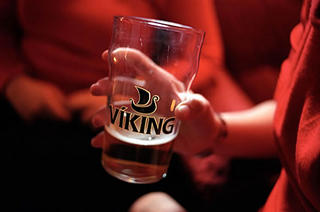 The buzz over Iceland has finally reached fever pitch. It seems everywhere you look these days, someone's talking about Iceland and its pure and sustainable food, and in the D.C. area, Iceland's native Viking beer is popping up on bars all over, most recently as the featured brew at Acadiana's opening party. Café Saint-Ex and Bar Pilar, with local ties to the country, have even been running ads in the City Paper featuring "Viking beer drinkers."

In Wednesday's New York Times, food reporter Kim Severson wrote about the Icelandic efforts to promote and sell the country's products to Americans.

And DCist reports on this weekend's Whole Foods-sponsored Food and Fun event, which brings Icelandic chefs to Whole Foods stores for cooking demonstrations through Sunday. Area restaurants have also caught Viking fever and are hosting the visiting chefs and serving Icelandic products.

Back in May, I was honored to be a guest at the home of the ambassador of Iceland for a screening of a Chefs A'Field episode, featuring Chef Jeff Tunks fishing for Icelandic cod and joining in on the annual lamb round-up. Look for the show to air locally this fall on PBS. Also in May, Iceland was the primary sponsor of the RAMMY awards.

So what's this all mean on the local food scene? Expect to see more restaurants heralding sustainable Icelandic foods on their menus, including spring lamb, North Atlantic cod and rich butter. Also be on the lookout for the products at Whole Foods, which will carry beer, cheese, lamb and butter from Iceland. "The Icelanders eventually plan to add trackable cod to the list," Severson reports in the NYT article. "Each fillet will be numbered, so shoppers can track the fish back to the boat that caught it."