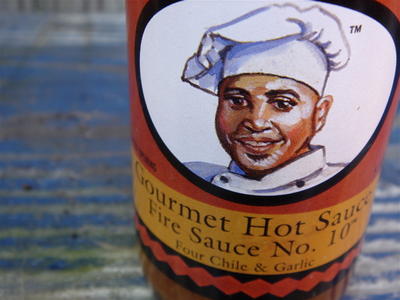 When it comes to hot sauce, heat should not be the only goal. But all too often, flavor is an afterthought behind the tongue-searing, tastebud-paralyzing properties. Well, area residents should know that there's one bad-ass, flavor-packed hot sauce being produced and sold right in our backyard.

Friends recently brought over a bottle of Uncle Brutha's No. 10 hot sauce, a local product I'd seen several times at a stand at Eastern Market but (stupidly) never stopped to try. Spiced primarily by habaneros, jalapenos and serrano chiles, the Fire Sauce No. 10 delivers a powerful bite that hits hard, but after the almost smoky, garlicky flavor charms your tongue. The No. 9 sauce, made with green chiles, is heralded today by the Hot Sauce Blog.

Uncle Brutha, aka Brennan Proctor (that's him on the label), started selling his hot sauce in 2003, and the No. 10 sauce was awarded second place in the 2005 Fiery Foods Challenge. According to a family story, Proctor's great granduncle George "Brutha" Hubbud was working as a Pullman porter on the Underground Railroad when "he came across a patch of wild bushes full of a strange fruit he had never seen before. These special chilies were used to give this sauce its unique flavoring."

Aside from Eastern Market, here's where to find Uncle Brutha's hot sauce.