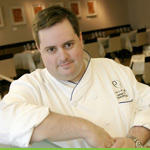 After a rocky start with a chef whose cooking was inaccessible at best, Palette struggled to erase the memories of deconstructed feijoada and black olive ice cream, even after snagging Clark, whose Southern-accented menu was the antithesis of the opening menu. But the match of the sleek, art-inspired Palette and Clark's citified down-home cooking never quite made sense. DC Coast on the other hand, where Clark's wife has worked as pastry chef, seems like a perfect fit. I just hope Clark will have the opportunity to make his mark on DC Coast's menu, which like the menus at the group's other three restaurants, rarely changes significantly. Metrocurean wishes Clark the best of luck in his new post, and I'll be listening for the announcement of Clark's replacement at Palette.

Meanwhile, rumors were swirling last week that Alan Yu, Zengo's chef de cuisine, had already called it quits. I spoke with chef/owner Richard Sandoval at Zengo last night, and he explained that Yu was taking a personal leave of absence. A chef from the Denver Zengo and Sandoval will be heading the kitchen in the meantime.