The Metrocurean Week in Review

What people are talking about...

Locally: Proving that people take their buttercream just as seriously as their politics in this city, the controversy I'm now calling Icing-gate '05 continues to swirl over whether Cake Love's cupcakes should be given time to warm up. Considering the comments found here, here and here, cupcakes seem to have the abililty to rouse surprisingly strong emotions. Now everyone take a deep breath...

... Rising from the ashes like Dumbledore's phoenix, Obelisk wins three stars from Tom Sietsema in his Sunday review. Several years back, the Italian restaurant was frequently touted as one of the city's top tables, but then it seemed to drop off the foodie radar. According to Tom, Obelisk is back, thanks in part to the return of chef Jerry Corso...

... OYA scores a set of new head chefs, who have given the menu some French and Asian touches... 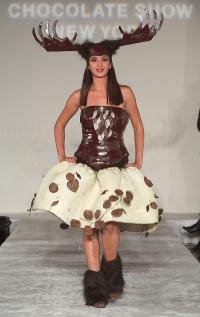 ... The annual Chocolate Show sets up shop this weekend in New York City, bringing with it a chocolate fashion show (I'm guessing that's a chocolate mousse pictured), and trends like organic, single-origin and flavor-infused chocolate...