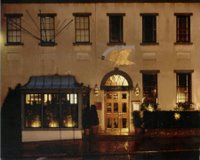 In preparation for the departure of chef Ris Lacoste at the end of the month, 1789 has selected Restaurant Eve chef de cuisine Nathan Beauchamp as its new chef. Beauchamp has worked under Eve's talented chef/owner Cathal Armstrong and supervised the restaurant's Tasting Room menu, which garnered a "gastronomic epiphany" designation from Tom Sietsema in his fall dining guide.

As for Lacoste, who is striking out to open her own restaurant, she said at an AIWF dinner last night that a year from now she hopes to be well on her way to opening. But first she plans to take some much deserved time off, "a minute or two," she joked. When asked if the new spot would be called Doris (that's where "Ris" comes from), she said she hears her name enough during the course of the day so most likely not.