Big Time in the Burbs

I admit that I don't get out of the city as much as I'd like to. I'm carless, and sheer laziness has me spending most of my weekends playing and eating within a few blocks of my house. But if there were ever a time when the burbs seemed to be having more fun, at least in terms of exciting restaurant news, it's now. Here's a look at what's new and coming soon outside the city limits:

100 King Restaurant
100 King St., Alexandria
This new concept from the Lebanese Taverna empire adds European flavors to the Middle Eastern mezze the other restaurants are known for. Read more about the Alexandria spot in this Weekly Dish. 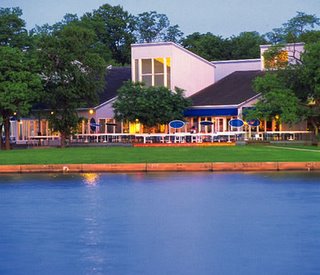 Indigo Landing
1 Marina Dr., Alexandria
The former Potowmack Landing (pictured) is getting a makeover and reopening April 10 with a new name and a new chef. Bryan Moscatello, who holds the honor of having been named one of Food & Wine's Best New Chefs in 2003, is creating a Southern low country menu, Tom Sietsema reports. DCist sounds excited about the new spot and the potential for an impressive wine program.

And More...
Geoff Tracy of Chef Geoff's will open Lia's Restaurant in Chevy Chase, where there's also talk of a second Sushi-Ko arriving this summer. Also in Chevy Chase, the owners of Indique will open Indique Heights, maybe by next month. In Silver Spring, Michael Landrum of Ray's the Steaks is expected to open Ray's: The Classics, and Old Town will be awaiting the arrival of Rustico, from the owners of Evening Star Cafe, Tallula and Vermilion, and Eamonn's/A Dublin Chipper, from the owners of Restaurant Eve.