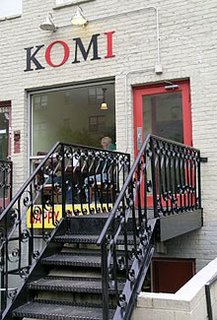 After closing for a few weeks for renovations (much to the chagrin of its fans), Komi has reopened with a new menu concept, reports The List: "In the spirit of recapturing a meal in the Mediterranean, diners will now begin with an ever-changing selection of mezzethakia -- dishes that feature the very best of each season's offering. That will be followed by your choice of macaronia, entrée, cheese and dessert. This set menu will be all that Komi offers on Saturday nights. Tuesday through Friday, you can still order a la carte off the menu. Based on many moments The List has enjoyed at Komi, we're betting this is going to be good."

According to a donrockwell.com commenter, the set menu costs $58 per person.

I've said it once, and I'll say it again: If you haven't been to Komi, you're missing out.