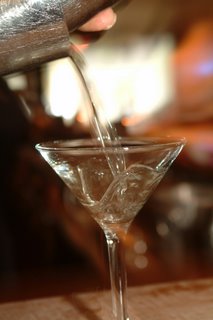 I'm a sucker for creative cocktails, and I'm ever so pleased that more restaurants are starting to treat the bar as another frontier in the culinary experience. And the new Rasika is one of the latest to craft a drink menu so enticing you'll be sending out a happy hour email before you can say "inappropriate use of company time."

Bartender Gina Chersevani has created some cool new cocktails with creative preparations. Toying with the concept of the standard gin and tonic is the Old Raj ($10). The tonic is frozen into ice cubes and infused with anise and then slowly melted in the glass by Cadenhead's Old Raj Gin.

The thought of the Frappétini ($10), made with "frapped" espresso, cardamom, cinnamon and chili and layered with Kahlua, Bailey's and vodka, almost had me leaving my desk and heading straight to Rasika.

Pulling in bitters, which are enjoying a resurgence in popularity and appreciation of late, the Grape and Grain ($9) mixes the herbal spirit with muddled red grapes, sugar and Woodford Reserve Bourbon, served on the rocks.

Rounding out the new creations (some of which will be waiting for the mercury to rise) are the Bombay Mojito ($9), combining muddled fresh coriander, cinnamon, lemon juice and a sprig of mint with Bacardi rum; the Granité ($9), made with pomegranate juice, ginger and five-spice tea, all frozen and shaved into a glass, served with Patron tequila; and the Pineapple/Cumin Cooler ($9), made with vanilla-infused sugar, pineapple juice, cumin and vodka.

But don't go just for the drinks. The Indian cooking is some of the best in the city. Read here about my first impressions.