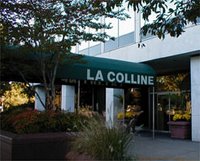 Today's Roll Call has a nice story on the closing and history of La Colline, including details about the man who has held the picket line outside the restaurant for the past six years.

The story confirms that a group of investors has purchased the French restaurant, with plans for a three month renovation. The investors seem to be holding their cards close as there's no public word yet on what the restaurant will become.

However, Roll Call did manage to make the connection to Johnny's Half Shell, which was originally rumored to be moving in. The story names lobbyist Joel Wood, who is a partial owner of several local restaurants including Johnny’s Half Shell and Red, Hot and Blue, as a member of the group of investors.

The only other glimpse into the future we get is a statement from a La Colline owner that he expects the new place to "lean 'toward seafood,' " according to the Roll Call story.

Hmm ... seafood. I know a place in Dupont that has great seafood ...