UPDATE: Duffy's grand opening is now slated for the weekend of May 12.

Back in September I wrote about Duffy's Irish Restaurant and Pub, which was struggling to get a liquor license for its Vermont Avenue location, just across from the 9:30 Club and around the corner from The Rhapsody, a new luxury condo building.

The owner's campaign for a liquor license finally proved successful, and the restaurant's Web site is heralding an April opening. That leaves only six days for the new spot to open its doors (that is if it hasn't already), but restaurant openings are practically impossible to predict, so keep an eye out in the coming weeks. The Web site also shows a few interior shots (below) of the construction. 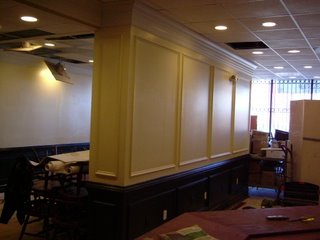 On the menu are some Irish classics like fish and chips, lamb stew, shepherd's pie and corned beef and cabbage, along with Americanized pub grub like buffalo wings, chicken tenders, potato skins and burgers.

Give Metrocurean a holler if you check it out.