Even His Crab Cakes Reign Supreme

Everything Roberto Donna touches seems to turn to gold these days. Fresh off his recent win on Iron Chef America, the Galileo chef and owner took home the best crab cakes award at Monday night's I Love Crab Cakes competition. 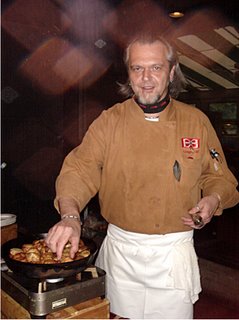 Also competing in the event, which was co-sponsored by the American Institute of Wine and Food and Phillips Seafood, were chef Greggory Hill of David Greggory (pictured), Jamie Leeds of Hank's Oyster Bar, Jim Swenson of the Fourth Estate and Geoff Tracy of Chef Geoff's and the soon-to-open Lia's. Former 1789 chef Ris Lacoste, who I hear may have found a location for her new restaurant, served as mistress of ceremonies. Swenson was honored with the people's choice award for his crab cakes, though Hill's rendition, which was wrapped in bacon and served with truffle-scented succotash, left a lasting impression on me.