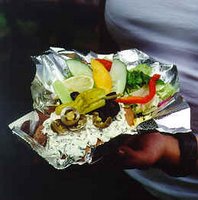 First comes news that we'll soon get to customize our doughnuts, and now it's baked potatoes.

The ever-diligent readers over at Gallery Place Living report that Potato Valley Cafe is coming to the Penn Quarter neighborhood near the Clara Barton building.

According to the company, building the potato works like this: "You take an Idaho Potato and oven roast it so it's crispy on the outside. Add a drop of butter and spice. Then you get to choose one of our 20 unique fillings. To make it even better we add shredded lettuce, vegetables, and imported Danish roasted onions."

The owner's plans to open a D.C. branch of his Annapolis shop were mentioned in a Washington Post article last year: "Owner Andy Ekbladh says potato cafes like his -- where you can top a baked with a myriad of concoctions -- are quite common in his native Sweden. Their 20 toppings include garlic butter with cheddar ($4.75); curry dressing with pineapple and greens ($4.55) or the Jamaican hot pepper sauce with cheddar ($5.55). The cafe will celebrate its 10th anniversary in July; Ekbladh expects to open a metro DC location in early summer."