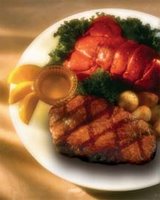 The restaurant takes its name from Jimmy's Harborside Restaurant in Boston and is apparently a new concept from the owners of McCormick and Schmick's, though the Web site makes no connection to the seafood chain. Back in September, when covering the lease agreement for the space, the Washington Business Journal reported that M&S would "test a new high-end restaurant that will serve 50 percent seafood and 50 percent steak to D.C. power brokers."

Claiming to be the only place in Washington to carry Old K.C. Branded Kansas City Custom Dry Aged Beef, the restaurant offers plenty of meat entrées including a 22-ounce cowboy ribeye and sliced Kansas City steak with a truffled demi glace. The extensive menu also offers about 14 seafood entrées and three different surf and turf meals, including the jumbo version — a 12-ounce filet and 16-ounce Atlantic lobster tail.

Dinner prices range from the low $20s to nearly $50 for a 16-ounce bone-in filet, while lunch prices are much softer, ranging from about $12 to $23 for main courses.