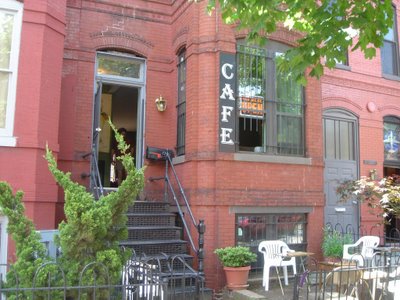 During its short-lived existence, Café Collage, pictured here during happier times, served flavorful cups of Ethiopian coffee in an art-filled rowhouse next door to Café Saint-Ex on T Street. Opened by two childhood friends who grew up together in Ethiopia, the coffee shop was the fulfillment of a longtime dream of business ownership.

But before long, while the owners were applying for a liquor license, they were shut down for not having a fire escape. Neighbors also protested the license. The sign and the owners have remained in the year or so since the café closed — a sad reminder of the sometimes harsh reality of running a restaurant.

But according to a post card, Café Collage is trying to stage a comeback ... with your financial assistance. There will be a fundraising event at U Turn (1942 11th St. NW) on June 26 at 7 p.m.

"We ask your help in reviving a home for arts and genuine Ethiopian coffee," the flier states. The money, it says, will be used to construct a fire escape.

I'm glad to see these guys trying to get back in the game, and watch Metrocurean for any updates.

Meanwhile, just around the block, a notice has been posted on the abandoned building at 1340 U St. NW (next to Polly's Café) for a liquor license for Axis Bar and Grill. The petition mentions American cuisine and the possibility of a patio, DJ and live music.

And finally, just a few doors down at Creme, a petition has been posted to add patio seating. It's a tight squeeze on that sidewalk, but a few extra seats at the tiny restaurant would be welcome.