The View From Aspen: A Chat with Chef Armstrong 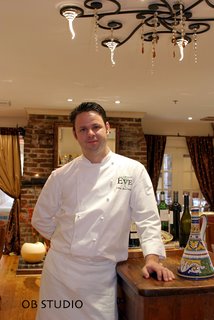 Chef Cathal Armstrong of Restaurant Eve chatted with Metrocurean Friday from the Food & Wine Classic in Aspen, where he is being honored as one of America's best new chefs.

A veritable who's who of the culinary world, from Emeril Lagasse to Daniel Boulud and D.C.'s own José Andrés, have descended on Aspen this weekend for the annual festival hosted by Food & Wine magazine. "The whole town is swamped with nametags," says Armstrong, who was doing a little shopping after appearing on local TV that morning.

Today, Armstrong is gearing up for the evening's big dinner, which he and the nine other honorees will prepare. For his part, Armstrong is cooking braised lamb shoulder terrine with roasted leg of lamb.

As for the other chefs being honored, Armstrong said the group has definitely bonded—especially on the bumpy flight to Aspen. "We didn't see any of them on our travels, but when we got to Denver and got on the plane to Aspen, there were five of the 10 on the plane," Armstrong said. "We come up over the mountains and make this steep decline. There was this kind of odd silence on the plane."

Beyond sharing a white-knuckle flight, "It's definitely cool to have a connection in a bunch of towns across the United States now, where you can say, "I'm in town and I'm coming to visit you,' " the Irish-born chef said.

"I really want to go to [David Chang's] Momofuku, that's on my list, and [Douglas Keane's] Cyrus is supposed to be great in California," he said.

On receiving national recognition, Armstrong said it's an honor, but his heart is still back home. "The most important thing for us is home and the local market. Those are the people that always support us," he said. "We know which side our bread is buttered on, ya know?"