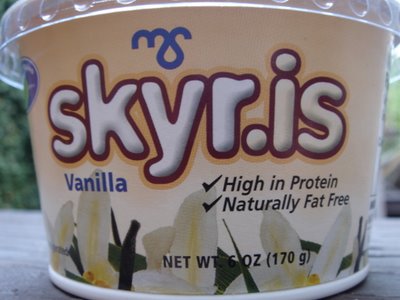 Actually, to say skyr is here is to imply that I know when it arrived. Truth be told, I just noticed it for the first time at Whole Foods. And after being sold on the merits of the traditional Icelandic treat by guests at the ambassador of Iceland's home last year, I was eager to see what all the fuss was about.

Described as a fresh cheese, skyr tastes more like yogurt and traces its roots back to the Vikings, though I have to wonder how far back the handy little collapsible spoon packaged on top goes. I picked up the vanilla version (pictured), which is sweet enough to eat as dessert. Despite being fat free, skyr is incredibly creamy — you'd swear you could be eating full fat yogurt. The texture is a little like strained Greek yogurt meets panna cotta.

In case you missed the start of the Icelandic invasion, which has thus far brought Viking beer, lamb and smjor (butter) to U.S. shores, check out this Metrocurean post from last September and this New York Times article.