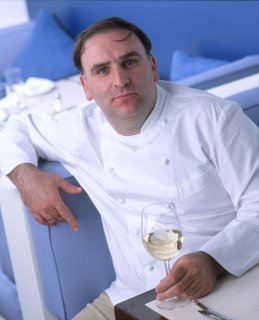 As we've discussed before, when it comes to big deal restaurants making big announcements, the official (read: able-to-be-publicized) word can be a long time coming. After plenty of speculation on the fates of Oyamel and Galileo, The Post's Tom Sietsema gets the on-the-record scoop and breaks the mold with a Friday Weekly Dish with all the juicy details.

Yes, José Andrés (pictured) and team will move Oyamel to the former Andale space. And yes, Roberto Donna will take over the Oyamel space while Galileo is closed for renovations.

Meanwhile, Galileo has sent out the humorously titled press release "Washington's Worst Kept Restaurant Secret Finally Revealed," with more details on Donna's plans. The renovations are expected to take about a year. "When I found out the building was going to be renovated it only made sense that I renovate my restaurants too, but it's been 22 years since I opened Galileo and I couldn't imagine a single day without a kitchen," Donna said.

As for his new Crystal City roost, the Italian chef said, "It's an ideal situation; the timing, the prime location in Crystal City, and of course the fact that my next door neighbor is my friend Jose [at Jaleo]."

One the menu at Bebo: the paninis made famous by his occasional lunch grill at Galileo, pizza, antipasti and other small plates. Prices will very friendly with antipasti ranging from $4-$9 and entrees priced from $10-$19. Wines by glass will start at $5.

Also look for a family style brunch on Sundays.

As for the other players involved, according to the release, "many members of Donna's Galileo team will join him at the new restaurant including Executive Chef Amy Brandwein."

And the transformation of Andale to Oyamel and Oyamel to Bebo will be in the hands of design team Adamstein and Demetriou. To note, Oyamel's signature butterflies will make a new appearance at the downtown location.

From the Oyamel team's news release comes this message from Andrés: "Oyamel fans of our signature dishes such as the house-made tacos, stuffed quail with rose petal sauce, Chiles in Nogada, and Salt-Air Margaritas will hopefully find these dishes in place at a new location. Washington is ready for Oyamel!"

We hear you, José!

For the record, the moves will put Oyamel at 401 Seventh St. NW (great news for downtown diners!) and Donna and his Bebo Trattoria at 2250 Crystal Dr., Arlington.