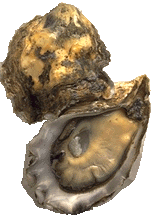 To celebrate the old saying that oysters should only be consumed in months containing the letter "r" (not that I live by that rule, by any means), I slurped down a half dozen Malpeques and Blue Points at J.Paul's after an errand in Georgetown.

Most of us ignore the summer oyster blackout, but where did the whole thing originate?

The Internet seems to blame a certain William Butler ... or Richard Buttes ... or Henry Butts ... well, the Internet can't seem to agree on the guy's name. Let's just say someone wrote in Diet's (or was it Dyet's?) Dry Dinner in 1599 something along the lines of: The oyster is unseasonable and unwholesome in all months that have not the letter R in their name.

Theories about this supposed unwholesomeness abound. Connoisseurs of taste claim that spawning oysters don't taste as good, and they spawn in the summer when the water warms up. Some say the claim dates from pre-refrigeration days. Another theory claims that the European oyster is to blame because it holds its offspring (during summer) inside until they form tiny shells, making for gritty eats.

Others blame it on warm water and bacteria. The government even weighs in with this:
MYTH: Avoid raw oysters in months without the letter "R" and you'll be safe.

Fact: While presence of Vibrio vulnificus bacteria is higher in warmer months, according to the Department of Health and Human Service's Centers for Disease Control and Prevention (CDC), a full 40 percent of cases occur during colder months from September through April.

(See, what they really mean is you'll NEVER be safe. Fearmongerers! There's plenty more unfun stuff at that link, like oysters are NOT aphrodisiacs, they won't cure a hangover and hot sauce and alcohol won't kill harmful bacteria. Well, damn, damn and damn.)

But even the Debbie Downer government won't make me stop loving the oyster. Tops on my list of places to enjoy a dozen or two are Hank's Oyster Bar and Old Ebbitt. Where do get your fix?