Not Another Pumpkin Pie 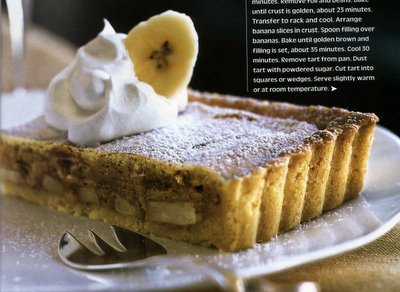 With all the talk of what to cook come Thursday, I thought I'd reprint this post from last November devoted to one of my all-time favorite desserts: the banana brown butter tart from Herbsaint in New Orleans. The recipe is posted here.

It was two years ago that I tasted what I still consider one of the best desserts I've ever had at Herbsaint, a delicious restaurant in New Orleans that managed to reopen shortly after Katrina. The banana brown butter tart, served at the restaurant with a drizzle of fleur de sel caramel sauce, isn't as strange or as banana-y as it sounds. Instead, the deep flavor of butter that has been browned permeates the sweetness of the bananas, creating a complex flavor that burned itself in my memory (and my family's).

So you can imagine our delight when a friend produced a magazine tearsheet with the recipe, I think from Gourmet but I'm not positive. What a perfect alternative to the pumpkin and pecan pies that I can hardly bear to look at after the holidays. So mom and I whipped one up for the Thanksgiving feast, and with the exception of the dough needing to chill overnight, it wasn't all that difficult. You also have to be careful to brown the butter, not burn the butter.

We didn't make the caramel sauce, but next time I will — it added a lot. The tart was almost as good as I remembered, but then again, memories have a way of becoming exaggerated over time, so our homemade version had a lot to live up to.

I posted the recipe here, in case you want to try it (or print it out and then stick it in a drawer somewhere and forget about it like I do most recipes).

(The above photo is from the magazine, whichever one it was, and I'll just hope Condé Nast doesn't come after me.)