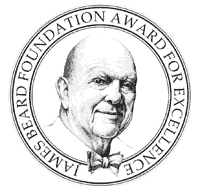 The prestigious James Beard Foundation wants to hear from you. Have a favorite local chef you think should be considered for a coveted James Beard award? Or a favorite restaurant you think deserves national attention?

Click here to register to vote. The deadline for submitting nominations is Dec. 15.

Categories are both national and regional in scope and include Outstanding Restaurant, Rising Star Chef of the Year, and Best Chef in the Mid-Atlantic.

Past winners from the D.C. area in the Best Chef in the Mid-Atlantic category include Fabio Trabocchi of Maestro (2006), Ann Cashion of Cashion's Eat Place (2004) and José Andrés of Jaleo, Zaytinya, Café Atlantico and (soon-to-rise-again) Oyamel.

Who will you nominate?