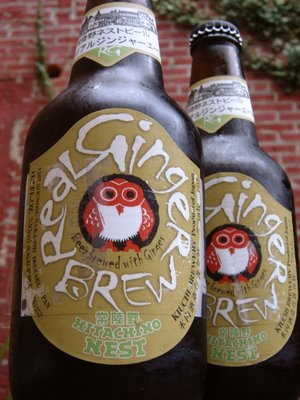 I'm a big fan of ginger, so when I noticed a two-pack of Hitachino Nest Real Ginger Brew at Whole Foods, I had to bite.

Produced by the nearly two-centuries-old Kiuchi Brewery in Japan, the ginger brew delivers a pleasing spicy bite. On first sip, it reminded me of the way beer tastes when you're eating sushi — bite of ginger, sip of beer, hit of soy.

At 7 percent alcohol, this is a very real beer, not a ginger ale. According to the label, the flavor comes from fresh ginger root, which is added to the brew kettle. Its spiciness and full malt flavor also make it a perfect drink for the holiday season.

That wide-eyed red owl peeping out from the label has established quite a following. Melissa of Counter Intelligence first introduced me to the White Ale, which she wrote about back in September. And The New York Times Style Magazine recently covered the brewery's Red Rice Ale. (Both are mighty nice, as well.)