Every Pig Has His Day 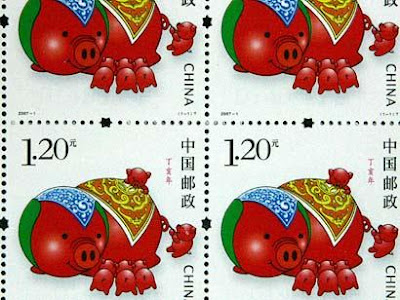 It's February 1. That means there are only 17 more days until a very important holiday. And yes, I can count (on good days), and no, I'm not way off on Valentine's Day.

The Year of the Pig starts Feb. 18, the Chinese New Year, giving pork lovers like myself a great reason to expound on the wonders of the other white meat. In honor of the pig, China has released a stamp (above) that reportedly smells and tastes like sweet and sour pork. (Thanks to The Food Section for pointing it out.)

As someone who's been known to take down a couple dozen strips of bacon in a weekend, I'll celebrate the year with occasional posts on porcine topics. And I'm sure I won't be alone, as Slate has already pointed out that food writers are, by nature, obsessed with pig.

For this inaugural Year of the Pig post, I'd like to mention TenPenh's porky menu, which will be available from Feb. 19 to March 3. Chef de cuisine Cliff Wharton looks to his Philippine roots for the amuse bouche: chicharon, or Philippine pork cracklings, with apple cider and garlic dipping sauce and patis, Philippine fish sauce. Guests can then choose between pork adobo raviolis followed by roast suckling pig or pulled pork shumai followed by Thai braised pork belly.

And for dessert? Maple panna cotta with bacon brittle. Oh yeah. The three-course menus will be available for $47.05 (it's the Chinese calendar year 4705).

(If you were hoping for a Valentine's post, check out The List, which has the lovers' holiday covered.)