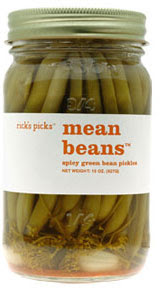 I remember reading about New Yorker Rick Field's pickles a few years ago in The New York Times and making a mental note to track down a jar or two. Being a Southerner, I'm addicted to spicy okra pickles, and I believe I've mentioned here before how much I like salt. Save the occasional magazine endorsement of Rick's Picks, I kind of forgot about them until I spotted a neat line of jars at Whole Foods this week.

And I've fallen hard for the pungent and spicy Mean Beans, pickled green beans spiked with cayenne pepper in a dill brine. The Windy City Wasabeans, flavored with soy and wasabi, are tasty, too. Whole Foods also had the Bee 'n' Beez ("turbocharged bread and butter pickles"), Phat Beets, GT 1000s, Slices of Life and Spears of Influence.

I always keep a few jars of Talk O' Texas hot okra pickles in the pantry, so I'm eager to try Rick's Picks Smokra (what a great name) with smoked paprika added to the mix. (There's a two jar per person limit on the web site!) Metrocurean friend Counter Intelligence was even inspired by the Rick's Picks story to try her hand at pickling.

At about $7.99 a jar, these are definitely designer pickles. But hey, we all have our weak spots. Some people splurge on handbags and shoes. I buy pickles.