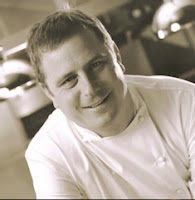 Chef Robert Wiedmaier (at left) is preparing to open the doors to his second restaurant later this month. Brasserie Beck (1101 K St. NW) "has been over a year in the making with a considerable investment," Wiedmaier says in a release, "and I'm so delighted to see it all come together just in time for spring dining in Washington."

The new restaurant is named for the chef's second son; his first son lends his name to Wiedmaier's French and Flemish accented restaurant, Marcel's.

The chef, whose father is Belgian, is planning a menu that weaves that country's culinary influences with French cooking. Look for dishes like choucroute "en croute", chicken waterzooie and coq au vin.

I peeked through the 165-seat restaurant's glass windows last week. The space is large and airy thanks to 22-foot ceilings. Old fashioned clocks, a generously sized marble and walnut bar and a separate raw bar anchor the space. Inspiration for the design reportedly came from European brasseries found in old train stations. Beck also offers a 10-seat chef's table and open kitchen.

The restaurant will offer continuous service all day, starting at 11 a.m. Dig the idea of camping out at the bar with a Belgian beer and platter of oysters? Thanks to free Wi-Fi, you may even be able to get some work done while knocking back a few Duvels.

As for the price point, expect check totals topping out at about $25 for lunch and $50 for dinner, according to Wiedmaier. The wine list will offer 50 wines under $50.