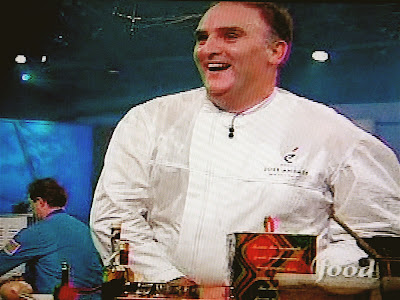 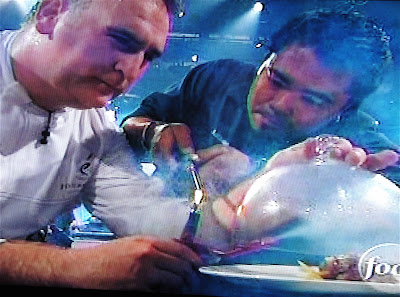 Pictured above, Andrés and Fukushima prompted a series of bong jokes from host Alton Brown as they funneled the smoke into the dome for the goat ribs dish.

Judges for the battle were Tim Ryan, president of the Culinary Institute of America, Rene Syler, anchorwoman for CBS' "Early Show," and perennial Iron Chef judge and food writer Jeffrey Steingarten. (The real showdown may have been between Syler and Steingarten, who traded a few barbs during the judging.) 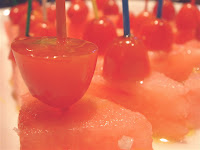 A full house gathered at Jaleo in Crystal City to cheer on Andrés. Too lazy to leave the house, I served a take on Andrés' tomato and watermelon skewers "Ferran Adria" (pictured; recipe here) and garlic shrimp from Andrés' book "Tapas: A Taste of Spain in America" (recipe here), Spanish cheeses, Catalan olives, Marcona almonds, chorizo, Serrano ham and a few bottles of Rioja.

Andrés is the chef and owner of three Jaleos, Café Atlantico, minibar, Zaytinya and Oyamel. Fukushima is the head chef of Café Atlantico, and along with Andrés, he and Garcia oversee much of the innovative minibar.