And Finally, A Medal 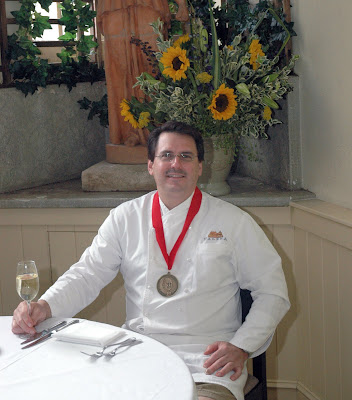 Thanks to Foodservice Monthly editor Michael Birchenall for sending along this photo he snapped of chef Frank Ruta of Palena with his James Beard award medal ... finally. Thanks to a snafu at the James Beard Foundation awards in New York, Ruta wasn't sure if he'd be getting a medal at all.

Confusion over who won the award for Best Chef: Mid-Atlantic erupted after last month's gala when Ruta's name wasn't announced as a winner. The chef, who didn't attend the ceremony, shared the prestigious honor with Vidalia chef R.J. Cooper in a tie, but only Cooper's name was announced that night.

The day after the awards were handed out, the City Paper's Tim Carman jumped on the story and broke down how the mishap came about. Seems only the script was wrong, but that mistake set off at least a day's worth of confusion, and Ruta was left wondering whether he really won.

He finally received the well-deserved medal in the mail. Better late than never, right?