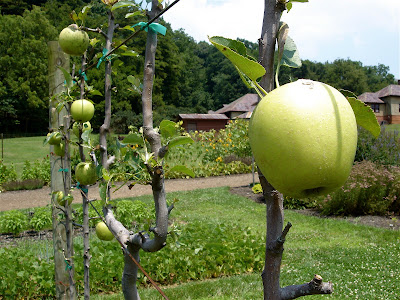 It might not be quite as impressive as the Declaration of Independence's 231st anniversary, but Metrocurean turned a ripe 2 years old today. (And I thought all those fireworks were for me.)

Though this little milestone almost passed under my radar, I was reminded of it while talking to my mom about signs at the P Street Whole Foods heralding local produce (albeit, a limited selection). It was two years ago, on this blog's first day in the world, that I first noticed signs designating local produce at my neighborhood grocery store and wrote about it.

Two years later, the local food drumbeat is growing louder. Same goes for sustainable seafood, humanely raised animals and small farms. You could dismiss it as a trend, but our food industry is one of the few places that a single consumer dollar can provoke big changes. And we consumers are becoming ever more savvy about what we eat and where we spend our money.

" and Michael Pollan's "The Omnivore's Dilemma: A Natural History of Four Meals

." Both tackle similar food topics — grass-fed beef, the benefits of local food, and sustainability — but in different ways. I promise you won't look at dinner the same way again. And that's a good thing.

Thanks for all your comments and tips, and most of all, thanks for reading Metrocurean.

(Metrocurean photo of the Biltmore's kitchen garden in North Carolina.)