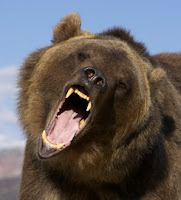 But seriously, I only say that so you'll know I understand your pain, even though I've spent the week gallivanting through the chilly Canadian Rockies, gazing at glaciers, eating wild raspberries wet with cold mountain rain, and trying to avoid grizzlies who also like wild raspberries.

Seemed like a good week to be MIA, eh? Here's what I missed in the world of DC dining:

• Hank's Deux: The Washington Post reports that chef Jamie Leeds will open a second Hank's Oyster Bar in Alexandria come September. I'm also listening out for official word on Leeds' planned bistro, which the Washington Business Journal reports might be at 14th and Irving streets in Columbia Heights.

• Capitol Lounge catches fire for the second time, but The Examiner says the popular Hill bar was expected to reopen tonight.

• With Restaurant Week nearing its official end, DCist stirs the pot by asking if full price is better in light of less-than-stellar RW experiences. Meanwhile, if you just can't get enough of the discounted deals, D.C. Foodies can tell you where to go for more.

We will now return to our regularly scheduled programming.