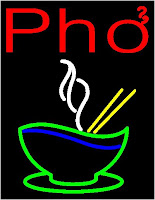 When it's miserably cold and windy outside, I get a hankering for spicy soups. My favorite go-to is pho, the traditional Vietnamese noodle soup. At home, I've been tinkering with a pho recipe from "The New Best Recipe" that takes a shortcut with chicken stock enhanced with star anise, cinnamon, ginger and garlic. It's tasty but not really authentic.

Meanwhile, my friend Brys of Cookthink has inspired me to up the effort ante with an excellent and appetizing blog post on how an experiment with homemade beef broth morphed into pho.

Loyal fans of Five Bites may have noticed how often pho from Pho 75 pops up on people's lists. (It's now a Five Bites All Star.) There are locations scattered all around the area, and Washingtonian says the outposts in Rosslyn, Langley Park and Falls Church are the best.

If you have time to make your own noodle soup, by all means give it a shot. But when you'd rather have your pho fuss-free, where do you go?