Keep Your Laws Off My Booze 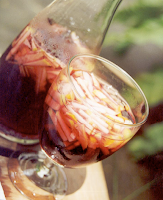 Did you know a bartender can get thrown in jail for serving sangria in Virginia?

A Washington Post story today reports that the Virginia General Assembly is reconsidering one of the state's royally dumb alcohol laws that makes serving sangria illegal. Get this: "Violating the sangria code is a misdemeanor, punishable by a $2,500 fine or 12 months in jail," the story reports.

I imagine that's not an offense you go advertising around the jailyard.

The same law makes one of my favorite pre-dinner drinks, the lovely kir royal, illegal in Virginia, as well.

The Virginia outposts of La Tasca (which has appealed a $2,000 sangria fine) and Jaleo have been affected by silly, out-dated regulations, as was Rustico last summer when chef Frank Morales cooked up some beer pops deemed seriously threatening by authorities. (Counter Intelligence helped put that story on the map.)

Anyone who's tried to ship wine home from out of state knows the hassles the long arm of the law can create. (One bottle per month, Washingtonians!)

I applaud the Virginia legislators for taking another look at the law, but it sounds like we need more renegade lawmakers to take up the cause so restaurants stop getting unreasonably hassled.