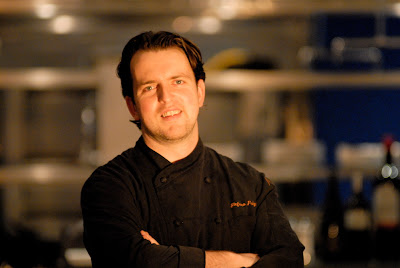 It's a tough break when a new restaurant loses its head chef soon after opening. And so it was with Mio, the sleek restaurant that opened on Vermont Avenue in May. Executive chef JohnPaul Damato, who had previously overseen all three Jaleos, parted ways with Mio just weeks after the doors opened.

But the restaurant hopes to get back on the culinary map with the appointment of new head chef Stefano Frigerio (pictured above). He brings impressive kitchen cred to his new roost, having been the second in command at Tysons Corner's acclaimed Maestro.

Frigerio worked as award-winning chef Fabio Trabocchi's right-hand man at Maestro for five years, after opening two restaurants with him in London. (Trabocchi is now charming Manhattanites at Fiamma. Maestro is currently closed and searching for a chef.)

Frigerio, who was born in a small village in Northern Italy, is putting a personal touch on the menu with entrées like slow-braised pheasant with parmesan, roasted pumpkin and crispy parsnips and grilled venison loin with sautéed cauliflower, anchovies and gin-juniper sauce. New small plates include a duo of hamachi — ceviche and grilled — with lemon sorbet and jalapeño (pictured at right).

To note, Mio will be offering lunch and dinner Restaurant Week menus through Jan. 31, so you have an extra week to check it out at a discount.