State Of The Cocktail 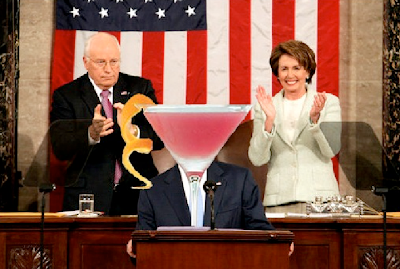 Bored by last night's State of the Union and looking for something a little more potent?

With crafty cocktails popping up with greater frequency (and mixologists moving all over town), I got to wondering about the state of the cocktail in DC. One thing is certain here, as in other major cities: Interest in the art of the cocktail is hitting a serious high. But are we keeping up with cutting edge trends? And when it comes to what's in our glasses, how far have we come and where are we headed?

For insight, I turned to a trusted source, Komi's Derek Brown, for a check-up on the DC area's cocktail craft.

First up, check out my list of the top cocktail talents shaking up the scene, compiled with input from Brown.

Next, an admission. Brown tells Metrocurean that the best cocktail he had last year was made at PDT in Manhattan. "It's called the Silver Lily and is a riff on the Violet Fizz sans soda — Plymouth Gin, Creme de Violette, Cointreau, egg whites and lemon juice," he says. "As I sipped it, I felt conflicted. I hate to concede the title of best cocktails to New York. I'm only glad I might not have to do the same in 2008."

That's because our cocktail scene is rapidly evolving. One trend to watch this year is the import of rare spirits and mixers, like Curacao from the actual island of Curacao and real Absinthe. "The shift in 2008 will be from mixologist to maitre'd liquorist," Brown says.

At PX and Restaurant Eve, pioneering spirit savant Todd Thrasher and his team, including PX's Clinton Terry, have paved the way for innovation and a guiding from-scratch philosophy. Behind bars all over town, watch for even more housemade ingredients, including sodas, tonics, bitters, vermouth and syrups.

As for a hot cocktail hood? "14th Street is becoming 'cocktail corridor'," Brown says, with nods to his brother, Tom Brown, who's manning the bar at Cork (which opens today!) and Adam Bernbach up the street at Bar Pilar. "Bernbach's Darkside, with Plymouth Gin, Marcarini Chinato Vermouth, Peychaud Bitters and spiced cherries, is going to be a contender for cocktail of the year," Brown says. Meanwhile, his brother has incorporated wine — Cork's focus — into his cocktail list by making Colonial-era influenced sangarees and flips with wine as the base.

"Gin is the new tequila," says Brown. For the best gin and tonic in town, he recommends heading to New Heights where chef/sommelier John Wabeck offers an array of gins matched with boutique tonics.

Who else is breaking new ground? Add on in the comments.