A Slice Of Barack Pie 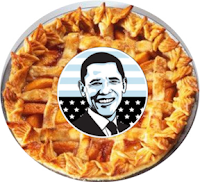 What will you be eating for lunch today, Potomac primary voters? How about a slice of Barack pie?

Thanks to my friends over at Cookthink for linking to this clever recipe for Barack Pie, a culinary ode to presidential hopeful Barack Obama, from a blog on The Root.

Author Veronica Chambers created a recipe that pays homage to Obama's Kenyan and American heritage and calls it her own "multi-culti spin on the apple pie cliché."

"Don't wait until November to serve it up," she advises. "Make it now. Take one, old school style, over to your 'on the political fence' neighbor."

Got a recipe for Hillary, McCain or Huckabee?