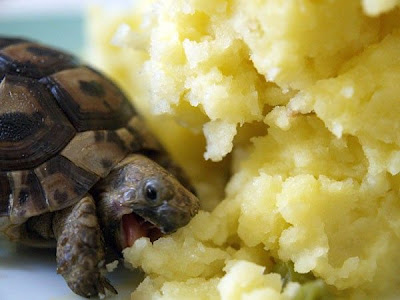 Caught onto the latest phrase infiltrating the lingo of the Internets?

Meet "om nom nom nom," more casually known as "nom nom nom." The turtle above would say this if he could speak.

If you're not hip to the nom nom phenomenon, the ever-credible Urban Dictionary defines the phrase as "an onomatopoeical adjective based on the sound emitted when something is 'oh so tasty' ... that one gnaws through it without regard to cleanliness or etiquette. This sort of ravenous eating will often result in an 'om nom nom nom' noise being emitted from the eater."

Cookie Monster is credited with coining the endearing sound, and it's catching on as an irreverent expression of epicurean enjoyment. Exhibit A: Serious Eats. Exhibit B: Obama nom noms. Across the pond, exhibit C: Londonist. Also seen in comments all over the blogosphere.

It's like an antidote to a certain TV celeb's sickeningly saccharine yum-o.

And however sophomoric, this meme's stuck in my head. Last night I ordered the brioche, prosciutto and egg sandwich at Cork, pierced the yolk and swirled the bread around preparing a perfect bite. Sure enough, an anticipatory "nom nom" escaped my lips.

Do you nom nom?