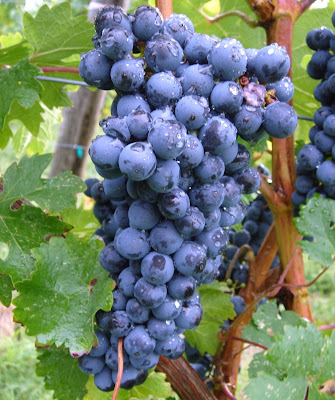 Grapes await harvest on the vines at Linden Vineyards
Despite living in DC for eight years, many of them as a food writer, I had never gone wine tasting in Virginia. As luck would have it, I chose to make my maiden voyage in the midst of a tropical storm, but that doesn't change the fact that in less than an hour, you can be surrounded by rolling hills and lush grape vines.

Thanks to the driving rain, we managed a measly two stops before seeking refuge at L'Auberge Provençale (with paw paws!). The storm had knocked the power out at Naked Mountain Winery, but you don't need lights to sip wine, so we bellied up to the bar for a tasting. If you like oak-aged Chardonnay, their 2004 was nice and buttery. We left with bottles of the 2006 unoaked Chardonnay, the 2005 and 2004 oaky Chardonnays, and the 2004 Merlot. 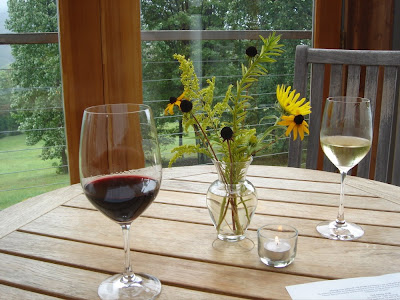 Wines on the porch at Linden
Next stop: Linden Vineyards, one of the state's most well known. Since it was such a quiet Saturday, we were offered a guest pass to sit out on the lovely glassed-in porch — usually reserved for those who buy a case per year — and watch the sheets of rain blanket the mountains. After leisurely glasses of the Hardscrabble red and white and a snack of local cheeses on a fresh baguette, we departed with the 2005 Hardscrabble red (my favorite of the day), 2007 Seyval and 2005 Claret.

Wine drinker I am, wine writer I am not, so I'll leave it at that. But if you haven't been wine tasting in DC's backyard yet, what are you waiting for?

Have a favorite Virginia winery? Let us all know.