Obama And McCain, As Sushi Rolls

The restaurant promos packed with political puns and nods just keep on coming. (Do they do this in other cities?)

If you're so inclined to politicize your drinking and eating, here's a roundup of places dishing up partisan offers:

• For Thursday's VP debate, the Lobby Bar in the Ritz-Carlton on 22nd Street is serving elk burgers ("the other moose meat," pictured at right) for Sarah Palin and mini chicken pot pies for Joe Biden. Sip Palin's Pit Bull, a cocktail made Bacardi Limon, cranberry juice and Red Bull, or the Not-So-Average-Joe with Southern Comfort, Curacao, fresh lemon and lime, and grenadine. 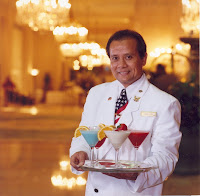 • The classic Town & Country bar in the Mayflower hotel is also tallying votes for partisan cocktails. Bartender Sambonn Lek (pictured at right) has concocted an Arizona Sunset (tequila, prickly pear syrup and orange juice) for McCain and Chicago Cocktail (Remy Martin VSOP, bitters and triple sec) for Obama. Both are priced at $11.95.

• The Madison's PostScript bar is pitting shrimp, McCain’s favorite food to eat, against chili, Obama’s favorite dish to prepare. Results will be updated daily and on display in the bar area.