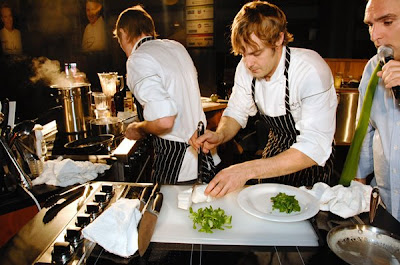 Barton Seaver plates his dish as host José Andrés looks on at the 2007 Capital Food Fight
The Capital Food Fight is one of my favorite foodie fundraisers, and this year's event, held Nov. 11 from 6 to 9 p.m., has attracted some major star wattage.

While the cooking battles rage on stage, guests are treated to dishes from 50 of the best restaurants in town. Tickets are $175, and can be purchased at online here. The event is held at Ronald Reagan Building at 1300 Pennsylvania Ave. NW.

In its fifth year, the Capital Food Fight has raised more than $1 million to combat hunger and create opportunity through the programs of DC Central Kitchen, "a national model program that uses the existing ingredients of society to satisfy hunger, promote self-sufficiency and change lives."