A Talk With Michael Mina 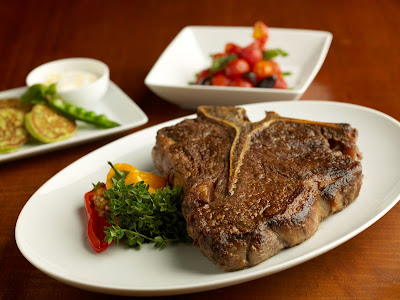 Bourbon Steak's porterhouse
Chef Michael Mina just announced the appointment of David Varley as executive chef of Bourbon Steak, which will open in the Four Seasons in December.

A few weeks ago, I had the opportunity to sit down with the San Francisco-based Mina while he was in town to chat about butter-poached steak, duck fat fries and the best thing he's eaten in DC.

Q: Does DC need another steakhouse?
A: I can't justify it until it opens. I think when the restaurant opens people will say, "Wow, it's a great addition to DC," and that's what I'm hoping for. I wanted a restaurant that people could feel was not a special occasion restaurant. The idea for me is that one day you would come and have a salad and a steak, and another day you would come and have tuna tartare and lobster pot pie.

Q: What will distinguish Bourbon Steak from the other steakhouses in town?
A: Our cooking method is much different, doing the slow poaching in the butter and finishing on the wood grill. It's a very slow, very natural way of cooking it that flavors it a lot, as well. The butter seals it so it's not like it's penetrating the meat. You're then taking it already warm and putting it on the wood grill to give it that char without having to leave it on there for 35 minutes. I love the flavor of meat cooked over wood. (To note: Pork is poached in bacon fat and lamb in olive oil.)

Q: During dinner, every table gets complimentary duck fat fries with dipping sauces. Why fries?
A: I wanted something fun. It really breaks up the formality.

Q: Opinions on the DC food scene?
A: Everybody seems to be talking about different people coming in from the outside. But how many local people have built themselves up here, that to me seals the city as a food city. I think it's all here.

Q: What's one of the best things you've eaten in DC?
A: When I went to CityZen, I had this cookie dough souffle with the ice milk. So simple, so ridiculously good.

Q: What mid-Atlantic products are you most excited about working with?
A: Getting the great soft shells, getting the great striped bass. It's always best when you're right there with the fish.

Q: Guilty pleasure?
A: Hamburgers from In-n-Out, and Reese's. I love chocolate and peanut butter.