No Star For White House Chef? 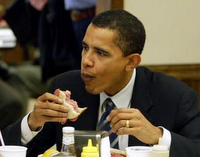 Improbable foodie speculation over the job has run rampant — from Art Smith, Oprah's former personal chef and the creator of Capitol Hill's new Art and Soul restaurant, to Nora Pouillon, Alice Waters and Rick Bayless (who tried to squash the rumors on CBS 2).

"It's not about advancing your agenda," Scheib told the AP. "It's not about building your repertoire. It's not about getting your business promoted. It's about serving the first family, first, last and in every way. That's the only job."

I suppose the position could be politicized and used to send a message (like the importance of sustainable and organic foods, see Waters and Pouillon), but I doubt it.

Cristeta Comerford, the current chef, became the first woman selected for the job in August 2005. Scheib thinks she'll stay on, according to the report. But that's no fun for the media to report, thus the wild speculation.

As a side note, don't forget that one of DC's top chefs came from the White House. Frank Ruta of Palena cooked for the Reagans and Bushes at the White House in the 80s.