I was thrilled to be a guest on Nycci and David Nellis' radio show "Dishing It Out" a few weekends ago. Up first on the show, pastry chefs Josh Short of Buzz and Heather Chittum of Hook talked sweets, while the rest of us sipped Short's incredible eggnog. Warren Brown of CakeLove talked frosting, cake and the awesomeness that is the star cut (more on that below). Finally, City Paper's Tim Carman and I discussed blogging and food writing.

Listen to the show here.

But back to the star-cut cake. Brown brought in a German chocolate cake, sliced into a beautiful star pattern, which creates smaller pieces. It's difficult to describe on the radio, but it's a pretty nifty trick, especially for holiday entertaining. So ... when I ordered a noodle and cheese pie from Chix the other day, I gave it a shot. It's not nearly as attractive as a German chocolate cake, but hey, it illustrates the concept. Behold, oh, starry noodle pie: 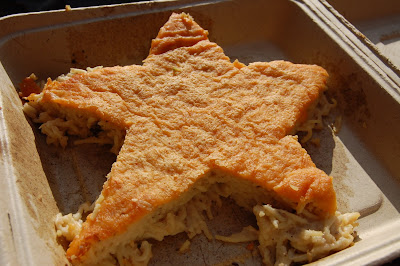 It was my first try, and I'll say Brown's was a lot prettier and more symmetrical. Each wedge that's cut out above is then sliced into two wedges. Then you lop off the star points, and you have a round left in the middle. Stunning, isn't it?