An Inauguration Tale Of Tortilla Soup 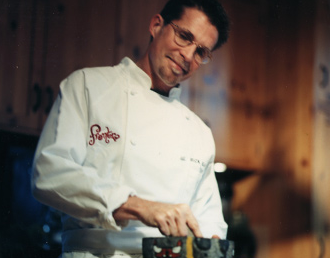 Chef Rick Bayless served an Obama favorite, tortilla soup, at a charity dinner in DC
Photo from rickbayless.com
A mere 10 hours before I found myself shivering and sandwiched in the doomed silver inauguration ticket line, coincidentally enough with Chicago chef Rick Bayless, I was slurping down a bowl of his fantastic tortilla soup in the warm kitchen of a home in Chevy Chase.

I had the pleasure of volunteering on the eve of the inauguration as a server for Bayless and his crew at a charity dinner, part of the Art.Food.Hope events last Monday that benefited D.C. Central Kitchen, Martha's Table and FreshFarm Markets.

The next morning, my ill-fated group of inauguration pilgrims — all volunteers from the night before, as well — ran into Bayless, his wife Deann and Topolobampo chef de cuisine Brian Enyart on our way to the festivities. They too had silver tickets, and they too bailed before making it through the silver gates.

But since we're hearing plenty about the plight of scorned ticket holders, I'll get back to the point of the post — that delicious tortilla soup.

When dinner was over, Bayless and Enyart graciously plated up food for the volunteers. I've clearly only had watery imitations of tortilla soup before, because this rich and earthy version blew me away. And as soon as I find a pasilla chile (suggestions?), I'll try making it at home. Here's the recipe:
Rick Bayless' Tortilla Soup