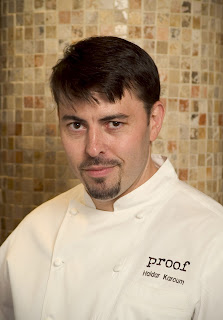 This week's edition of Chef Five Bites, though he says five ain't fair, comes from Haidar Karoum, executive chef at one of my all-time favorite spots in the city, Proof.

1. Large bowl of #1 pho (tripe, rare eye of round, brisket, soft tendon and flank) with a side of scallions in oil, meatballs and soft tendon at Pho 75

2. Roasted chicken at Palena — "Probably my favorite restaurant in the country."

3. Otoro from Koji Terano at Sushi-Ko

5. Banh mi #1 with the works at Song Que in the Eden Center